The Pricing reports give you information about trading prices for a particular security. You can see a security’s price history, view information about today’s trades, or view the various bid and ask prices to help predict what prices will be coming next.

To access Pricing reports, go to the Actions menu, choose Pricing, then choose a report from the list: 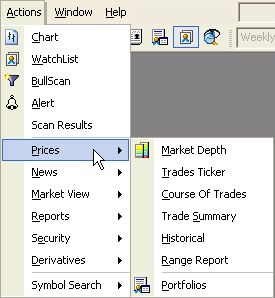 Some of these reports only display information about a single security. To choose a security, enter its security symbol in the Symbol box in the toolbar:

The following reports are available:

Market Depth lists the various bid and ask offers for the given security, and updates the list as trades occur.

Trades Ticker lists all the trades for a particular security that have occurred since Market Open, and updates the list as trades occur.

Course of Trades lists all the trades for a particular security that have occurred on any particular day in the last week.

Trade Summary lists all prices at which the security has traded today. It includes the volume, value, average value and number of trades at each price.

Historical lists open, high, low and closing prices, volume and value traded, as well as the number of trades for each day.

Range Report summarises the price movement of a security for the past month.

Portfolios is not a particular report, but the entrance to the Portfolio system. For more details, see the chapter entitled “The Portfolio System”.

Some tools allow you to save the information as a text file that can be imported into Microsoft Excel. Scroll to the bottom of a report till you see the Save icon.

Next,a dialogue box will appear. You have a choice to open the file directly in Microsoft Excel or save to your hard disk. The file is safe to open or save on your local computer as it is only text data.

The Market Depth report lists the various bid and ask offers for the given security, and updates the list as trades occur. 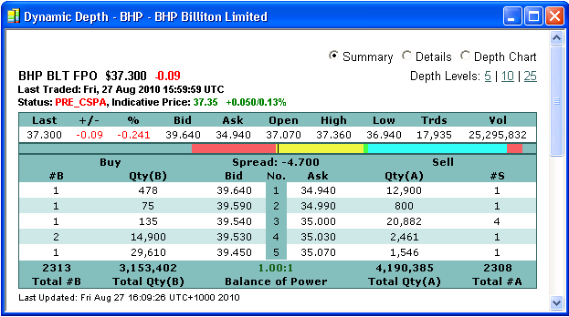 The Trades Ticker report lists all the trades for a particular security that have occurred since Market Open, and updates the list as trades occur. 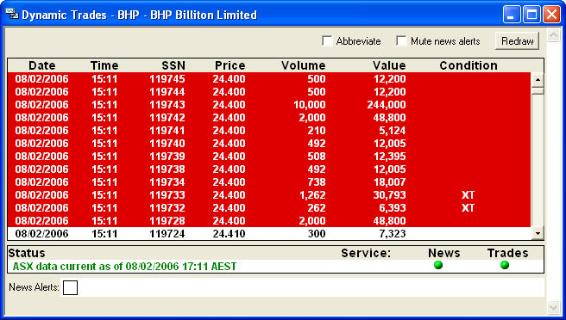 Green indicates that the trade is an increase on previous close.

White indicates the price is the same as the previous close.

Abbreviate will abbreviate the Volume and Value figures. For example 10,000 will appear as 10T.

Mute news alerts will silence the audible alarm when a new announcement has been released for the particular stock.

Redraw will clear the screen if the image is fractured or unclear.

Service lists the status of the services displayed in the window. Green indicates the system is connected to the server and receiving updates. Red indicates which service is down.

The Course of Trades report lists all the trades for a particular security that have occurred on any particular day in the last week. It includes all information about each trade, including the Trade Sequence number and any special conditions. 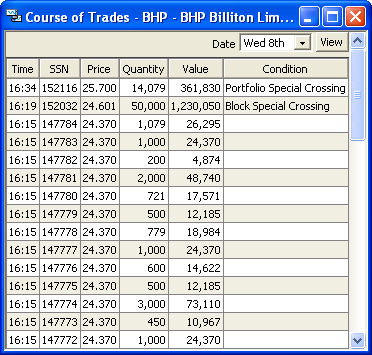 To view the trades for a different day, choose the date from the “Date” list, then click “View”.

The Trade Summary reports all of the prices at which a particular security has traded during the current day, and gives some brief statistics on each one: 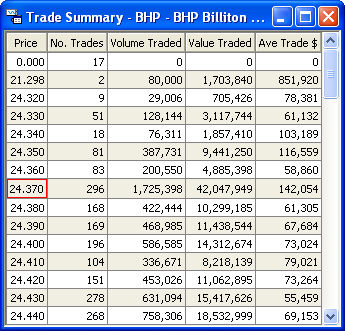 The price with the red box is the current market price.

The Historical report displays end of day pricing information for securities going back to the beginning of the year 2000. 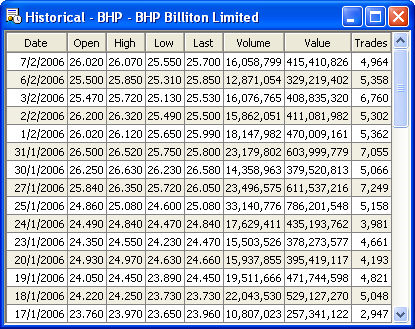 The Range Report summarises the price movement of a security for the past month. 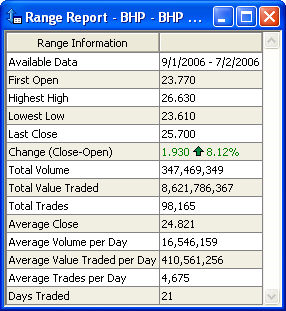 The Trade Summary shows some trades at zero dollars

Placeholder trades occur when the user is not a party to the trade, and the trade contains one or more of the following accounting condition codes: BP, FM, LN, and LR (see appendix for Condition Codes).